History of the Dante Alighieri Society

The Dante Alighieri Society traces its roots back to Italy in July 1889, with the publication of a manifesto expressing the hope of creating a society that would transcend political, national, and social barriers; a society cultural in intent and purpose; a society that would reach out to Italian nationals throughout the world wherever the political and economic constraints of their homeland had forced them to emigrate and provide a thread of unity among these widely dispersed groups of people by keeping alive the knowledge of the language and love for the culture of their native Italy. The manifesto was signed by laymen and catholics, monarchists and republicans, conservatives and progressives; it was one of those few occasions where Italians were able to silence their divisions and their fractiousness. The society was named for Dante Alighieri (1265-1321), a pre-Renaissance poet from Florence and author of "The Divine Comedy" who is considered the father of the Italian language.

In October 1948 the Society was restructured at a meeting in Venice to give total autonomy to all chapters of the Dante Society so each could conduct its activities independently, under the direction of its own elected officers, in a manner that best suited local needs, preferences, and capacities while adhering to the Society's basic principles.

Another revision, also very important, was to restate, clearly and simply, the philosophy of the Society: the sole purpose of the Dante Alighieri Society is to promote the study of the Italian language and culture throughout the world...a purpose independent of political ideologies, national or ethnic origins or religious beliefs, and that the Society is the free association of people - not just Italians - but all people everywhere who are united by their love for the Italian languages and culture and the spirit of universal humanism that these represent. 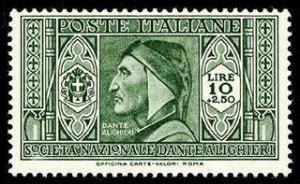 ​"Not made to live like a brute”: Remembering Dante Alighieri
Dante Alighieri’s significance stems from his work and extends beyond it. He is the quintessential European figure, epitomising the different strands which make Europe a culturally rich and distinct continent
By André P. DeBattista The European Conservative 31 December 2021
(Click link below to download)